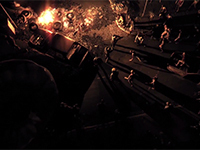 I'm a bit confused here with the latest from Dying Light as I thought that the co-op was one of the original selling points for the game. Now we have the latest Gamescom trailer for the game that is highlighting all of the accolades Dying Light has received thus far as well as how we will be playing the game in co-op. From the looks of it that will all be in an online form and not split screen with your buddy sitting right next to you. I miss those days sometimes.

Below is said trailer for Dying Light and the game is looking closer and closer to Dead Island by the trailer. Well Dead Island with free running mixed in. Dying Light just looks to have the feel of what I have already played with just a bit more of a serious overtone to it all. I'm hoping that once we get to play the game it will shine in its own different light and not feel like a knockoff of the developer's past titles that used the same formula to succeed.

I am a bit curious as to the reasoning behind allowing players to have business suits to run around and kill with in Dying Light. Short of just offering the skin for the characters I am hoping that there is some bit of story to it. Maybe the reason behind the plague of Dying Light and who happens to be making those supply drops that we have seen in past trailers. February 2015 is still a bit off but I kind of wish we could fast forward to the plethora of titles that includes Dying Light coming to launch.