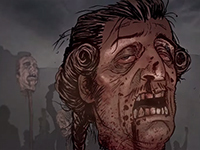 Just before SDCC we caught wind that Rob Zombie was going to do an animated film based on Assassin's Creed Unity and the French Revolution that take place in the game. I was a bit ecstatic but also a bit concerned given the fact that a lot of what I love about Rob Zombie's work in the past is something that I would think Ubisoft would be a bit hesitant to embrace. Especially when he gets teamed up with The Walking Dead's co-creator (Tony Moore) to illustrate what he does best; horrid gore and blood. Sounds like an amazing team up to me but like I said I was worried they would get hamstringed.

Well it looks like I don't have to worry no more as that Assassin's Creed Unity animated short has been released and it is glorious. It doesn't look like the team was hindered at all to keep the content "decent" for all ages. Assassin's Creed Unity is a game about murdering people and it does take place during events where murdering in public was all the rage. That is just what we get here from Mr. Zombie and the amazing team that was brought together. Have a watch and stop reading my words for now before I keep gushing over the violence.

Heads up before you click play. It is full of gore and blood and most likely not suitable for work displays. Just a heads up.

I do wish that there was a bit more to this look at the French Revolution though the violent and horror filled eyes of the team that made it but that would most likely lead into a full animated series. Hmm… Now there is a grand idea. It would also keep the Assassin's Creed universe flowing for a few more years; as long as the story was somewhat decent and fit into the overall experience. Can I claim that idea before Ubisoft steals it and uses it?