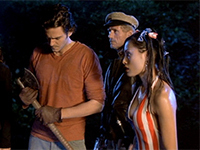 Time to hear the resounding cheers and jeers for the announcement of a Dead Island film. Yes, it looks like we may be getting a film adaptation of Deep Silver's largest zombie themed game. The first Dead Island has sold over 8 million copies of the game to date so it seems like it would be a perfect time to rake in more dough on the franchise. Zombies are still all the rage so it makes sense.

If you are not 100% familiar with Dead Island yet, the story goes that you, the protagonist of your choice, has gone to an island paradise where the party of the year is taking place. Then the dead rise. You find out you can't be turned and so it is off to find your way off the island as well as trying to make head or tales of what is going on. Why have I heard that film premise before…?

House Of The Dead Trailer

Oh shit! That film has already been made. It was a video game adaptation for another title as well. Granted House Of The Dead, the aforementioned title, was nowhere near the premise of the game it was based off but it does sound a lot like Dead Island now that I look closer. How have I not seen this before? My mind is a little blown. The only main difference I see here is that Dead Island is insanely awesome while House Of The Dead was only good for nothing.

Jesting aside, as long as Deep Silver and Occupant Entertainment can get a decent team together I have faith a Dead Island film wouldn't be a blunder at all. Animated or live action I am sure given the track record for Deep Silver Dead Island the movie will be a great addition to the overall universe. Even if it is just a retelling of the Dead Island story for a massive audience who has yet to enjoy the games proper. I mean, look at what they do just for the games and extrapolate from there.