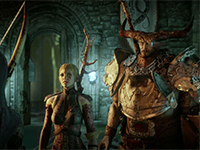 Earlier this week we were able to see the first half of the Dragon Age: Inquisition demo from E3. It was all about the world, exploration, and all the crazy combat options we are going to get when we actually get to play the game. Now we get to see how some of the game's choices will play out in a more "instance" like scenario in the part two video for Dragon Age: Inquisition. You know, the other half of what makes these games absolutely amazing and drawing all of us back into the game's lore.

A word to the not-so-wise here. There are spoilers for the overall story of Dragon Age: Inquisition. At least for the one mission we will get to see unfold here today. The only drawback here is that in the mix of all the story stuff there is more detail on the tactical fighting mode of the combat. That would be the bit where time stops for us to give commands to each character so we don't have to swap quickly between them all to make sure they are doing what they need to be doing.

Now that you are able to see the full Dragon Age: Inquisition demo, do you agree with my words? Or are you happy that you have now been able to see everything for yourself? My impressions haven't changed even though this play through used a different main character but Dragon Age: Inquisition still feels more like a DnD or Pathfinder game gone digital even though the NPCs here have quite a few dialog choices to use during combat.

Hopefully this will tide us all over until Dragon Age: Inquisition comes out on October 7th. I'm sure it won't as I know I want more and I am not as rabid a fan as the lot of you who just came in to watch this second half of the demo. Just don't riot in the streets is all I ask.