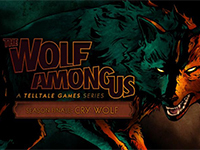 Here we go with the ending of the first season of The Wolf Among Us. We have a new trailer for the episode and this time there is no waiting for the release dates as it looks like Telltale just figured that they should release everything all at the same time unlike the many times before. It does seem a bit odd that this episode is coming out before the next episode for The Walking Dead but at least we can see what happens in Fabletown now that 'war' has been declared by the better characters against the weaker. Yes, I think the protagonists are the weaker characters in the story here.

I bet you are wondering what those release dates are for The Wolf Among Us' last episode until we see if there will be a second season. Well here you go with the full list instead of the odd truncated and stretched out list from last episode.

For me this is the last chance for The Wolf Among Us to recapture the awe and amazement of the first episode of the season. Each episode since then has left me wanting more until Bloody Mary was introduced. That only added a new character for me to enjoy but still left all of the basic mechanics with no interesting twists to the gameplay. That is something that even The Walking Dead has been lacking in the second season of the game but was filled with during season one. Maybe I want to really feel like my choices matter and not just to get the same result no matter what. Is that asking too much?

I guess we'll see how this all wraps up next week though. The way I hope the story ends would not lend itself to having a second season of The Wolf Among Us but would make for a better story so I doubt I will see that. At least if Telltale wants to keep the franchise rolling out into multiple seasons. We'll see I guess.