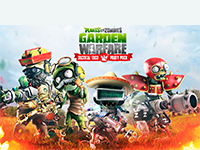 Good news for those who have picked up Plants Vs. Zombies: Garden Warfare or another reason to pick up the game for those who have been holding out. Today (7/1/14) there is a new batch of DLC being released for the game called the Tactical Taco Party Pack and it is completely free to download. Who among us doesn't like the terms free and DLC put together for a game in an age where nickel and diming the consumer is all the rage? None of us hopefully. If you hate free DLC then you can send your $100 bills for wiping you ass over my way; before the wipe preferably.

This new batch of DLC will add quite a bit to Plants Vs. Zombies: Garden Warfare as it stands right now. It adds two new characters with their own special abilities and combat form. There is also a western themed new arena for battling your plants against those zombies. There is even a whole new game mode called Vanquish Confirmed that sounds pretty close to the Kill Confirmed mode of all of those other shooters we love. Ok, not close, it pretty much is the same mode just with the Plants Vs. Zombies theme around it all. No dog tags but crazy orbs if that makes any kind of difference.

The Tactical Taco Party Pack is only stated as a DLC pack for Plants Vs. Zombies: Garden Warfare on the Xbox 360 and Xbox One but in no way does it sound like a limitation. Maybe the free aspect is only for the Microsoft versions of the game but I see it hitting the PC and PlayStation versions at some point as it wouldn't be the way to do business nowadays. I'm just going to assume that for now until proven wrong otherwise. Until then, check out the trailer showing off all those free goodies for Plants Vs. Zombies: Garden Warfare coming out today (7/1/14).