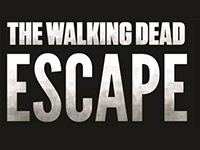 If there has been one thing that has caught my love over the last few years at San Diego Comic Con it has to be The Walking Dead Escape. If you haven't seen or heard of it or seen it you can see my 2013 run and my 2012 run or you can just look around online as the event is still touring around the country giving all of us gamers a chance to test our mettle in a real live zombie apocalypse of sorts.

If you are just one of those lazy people here I'll recap what the event is all about. In a nut shell they people who put on the event take over an arena, mall, or large building structure and do it and its surroundings up as if it was a location from The Walking Dead show or comic. This includes but not limited to blood spatter, body parts, over turned cars, concrete barricades, and other wooden obstacles. Attendees then get to take on the role of a Walker or a Runner, depending on what you pay for, and then everyone gets to play out a real life Walking Dead, Dead Island, or Dying Light scenario. I can attest that it is just like those titles but no Kinect or Move needed to "play the game".

Before this year and the end of last year SDCC was the only place to participate in The Walking Dead Escape. As of now it is the only location left to do so until October 25th if you live near Miami, FL. Also special to the SDCC event is that it runs for two nights instead of just the one so you can have multiple attempts to play this real world zombie game on July 25th or July 26th. That is also not to mention that here you might be able to run it with the stars of the show, games, comics and see if you can outscore them at the same time. They really need to have a high score system for this that is published online. Or Trophy/Achievement support.

Seeing as most of you readers out there like to talk a big game and will most likely be travelling to this huge event, why not put your money where your mouth is. Stop being a controller warrior and be one in real life. I plan to go out and better my time from years past, although last year will be a bit rough to beat. Hells, even if you don't want to run it you can keep being one of those sideline heroes and spectate for a much lower price and cheer me on as I Duck, Dodge, Dip, Dive, and Dodge all the walkers out there.

Early bird prices are below and can be purchased here. It may all sound silly but it is one of the best real world video gaming experiences I have had the pleasure of participating in over the years. If you plan on running, drop a comment here and maybe we can try to survive The Walking Dead Escape together at SDCC.