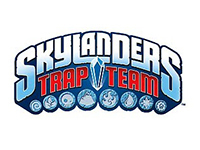 There have been others out there to try and clone the Skylanders experience but none can do it like Toys For Bob and they are doing it again with Skylanders: Trap Team. This will be the fourth major title in the series and the third one that the developer has been 100% behind. Just when you thought that they were not going to be able to innovate and/or drain more cash from your wallet, it looks like they have and will. I got to check out some of the new features that will actually keep me dropping load of cash for Skylanders: Trap Team.

Let's start with the new story for Skylanders: Trap Team. The premise is that you and all of the other Skylanders have captured all the bad guys over time but Kaos wants to set them all free. In doing so he blows up the prison which also spreads shards of Traptanium all over the world of Skylands. This is where we come in controlling the new Trap Master force to clean up the mess and capture all of the bad guys again. This is done through trapping them in the shards that are all over Skyland.

That of course all plays into the big focus here for Skylanders: Trap Team; the new toys, the real world shards to capture the baddies, and the new portal for it all to be placed on. Everything a growing collection needs and wants. At least sans the new portal but more on that later. First we dive into the new toys and heroes.

During the demo, which played and looked like every other Skylanders game to save the time, we were shown a few of the Trap Masters (Wallop, Jaw Breaker, Snap Shot) and one of the core new characters (Food Fight). There were many more on location but the team driving the game real played up Food Fight and Wallop. All the while explaining that all of the Trap Master characters will have crystal items on the physical toy as their signature for Skylanders: Trap Team. In game they will do extra damage to any of the escaped villains but that is about as far as the upgrade goes. Nothing as dynamic as with Swap Force.

All of that was ok as the real big focus was on how they took the idea of having the physical toy and bringing it into the game and flipped it so that we can now take the villains out of the game via the crystal traps. At first this seemed extremely basic and more or less just leaving them all as fancy USBs to represent toys. Surprisingly they are much more than just that. Not only can you summon the villain you captured with the crystal, but while it is plugged into the new portal the character will talk to you, joke with you, or harass you based on your play. Even as an adult I was hit with a bit of wonder as you could hear the character "leave" the game and then start trash talking in the real world.

This does of course mean that you will need a whole new portal to play Skylanders: Trap Team though. The new one has a place to insert your trapped characters but also has a speaker system that helps make all of the transitions between the toys to the game sound very real. Even while I was sitting many feet away from the portal it sounded like the character was digitally, or magically, moving from crystal to game. It was an amazement in technology I haven't felt for some time and it is insanely basic.

Don't worry for any and all of your collection from before though. All of the past toys will still work with the new portal for Skylanders: Trap Team, it is just another expense that has to be paid so that we can all play with the villains we are defeating and that includes Kaos himself. It looks like a small price to pay after you have fully seen it in action. If you are frugal though you can still play Skylanders: Trap Team sans the new portal, you will just lose out on some of the new functionality and being able to play as the villains. Well more tag them into play.

The adult gamer in me wishes I could play as the villains I captured more than some of the heroes, looking at Paiñata, but there is a mechanic that only allows them for a short amount of time before needing to recharge. Similar to like what happens currently in Skylanders when your character dies but with a much shorter time frame. This was implemented to teach children the concept of tag-teaming when someone questioned why. That sounds a bit off for my adult mind but that is the full reason for it.