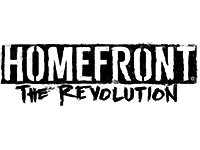 Yet another title announced just shy of the official E3 startup was Homefront: The Revolution. One of the IPs that was picked up from THQ during their fire-sale following the shutdown of the company. This time being helmed by Crytek using that oh-so-beautiful engine of theirs and published by Deep Silver. I was lucky enough to sit through a demo, no hands on here, for Homefront: The Revolution so sit back and enjoy the breakdown I have on what I think about what I saw.

Just in case you didn't get enough of Red Dawn the video game Homefront before or you thought there was room for improvement it looks like Homefront: The Revolution is what you will be looking for. The first thing that impressed me, which I knew it would, was how amazing and detailed the game's world looked. Even in this short demo you could tell that all of the designers and artists took special care to give us a living and breathing Philadelphia. I've never personally been so I can't check the accuracy of their version of the city but it was stated that there will obviously be those added touches to give the player the feel of actually being there. I'd imagine if you had an Oculus or Morpheus attached to the game you would get the real feeling as I did watching in a crowded room.

As far as gameplay goes, Homefront: The Revolution looks like it will handle just like every other shooter out there to date. I'd go on a limb and say that it will play like the latest Crysis at the core of everything. That is not me just saying that The Revolution is going to be just another generic shooter, it just looks to be using the mechanics that we are all used to with a few little additions that would be required to move the story elements of the game forward. Again, the same adage, "if it ain't broke, don't fix it."

That said, then what was shown that would make Homefront: The Revolution feel a bit different than other shooters, besides just the story?

It was touched on a bit in the showing, and you can hear a bit more in the following gameplay video for Homefront: The Revolution, but there is what they are calling a Resistance Support mechanic in the game. From what I saw and was explained is that this is Crytek's way of adding in support characters without having to force them upon you. As you go about the game's world you will start to rally support for the resistance and the revolution. If what I am thinking is correct, these people will take place of the usually throw away characters that aid in combat for other games. It also sounded like this is not a set number of "helpers" either but all based on how you "lead" the resistance. Who would rally behind a poor leader who is only going to get you killed, right?

A good benefit for those not looking to lead in Homefront: The Revolution but to go about their own way, the game's world and missions are set in an "open world" kind of setting. The better way to say that is that there will be multiple ways to tackle each mission. Since this is not a guns-a-blazing kind of shooter and focusing on the guerrilla tactics there should be 50 different ways to skin the cat or the GKR. Obviously since time was short in the demo we were shown a very specific path but I could see different ways I would have preferred to go instead of where the driver of the demo took us. All to fit my specific play style wore than just being correct.

Now, I have never played the first Homefront due to time constraints but it is on my back log. From what I saw of Homefront: The Revolution it looks like that will get bumped up the list in preparation for the new game. Granted I have some time as The Revolution doesn't come out until next year (2015) but the showcasing for this game has greatly piqued my interest in the franchise. It is a rare case that I get interested in a title based on its sequel; especially if it is a sequel that is not being helmed by the originally announcing team. Red Dawn jokes be damned here as this is the real deal.