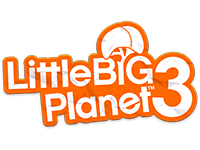 Talk about a shocker out of left field with LittleBigPlanet 3. I knew it was coming sooner or later but when Media Molecule made it well noted they were not going to be showing anything at E3 I passed the hope for another LittleBigPlanet off. Then of course Sony had to go and change developers to Sumo Digital and that completely kept things under the radar. But none the less we have LittleBigPlanet 3 incoming for the PS4 and PS3 and I was able to get a bit of hands on with it at the Sony booth. Here's what I though.

Pretty much if you watched the Sony press conference you saw what was there to demo. All four new characters and their abilities to play with in the new levels. I was lucky enough to get to control Toggle, the larger and stronger of the group who can also become the smallest. We all set out to get to the rocket at the end of the short level designed to show off each character. In the aspect of saving time I'll just say that the whole of LittleBigPlanet 3 plays just like the first two in the series. Not a big shocker there I know.

That said, Sumo Digital from the looks of it has taken the winning design and let it be. No changing things just to change them up as it seems the case when titles move from developer to developer. The only real change, besides the new characters, is that each does have a special movement or action that is all tied to the L1 button. Nothing too drastic I know but it is worth noting in the interest of making sure you know what I know.

One of the question I had, as well as others, was "how will it play if I am an antisocial person who wants to play LittleBigPlanet 3 by myself?" Well, while it wasn't in the demo here the answer to that is just like if you were playing any other LittleBigPlanet game solo. There will be sections of the game that will say "hey, you need Swoop here with Sackboy for this bit of fun." or something to the likes. So you won't be required to have three other people playing to enjoy LittleBigPlanet 3. It's only needed if you want to fully enjoy the game.

Nothing else for LittleBigPlanet 3 was touched on in the demo outside of that so that about sums it all up. No level editing stuff and nothing much on all the other things we love about LittleBigPlanet but I am sure it is all in there. It wouldn't be a LBP game without those features. It was a bit odd not to see them as the slate right now is around the Holidays here in the States. I guess we'll have to wait and see.