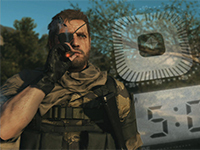 All of the teases and short shows of Metal Gear Solid V: The Phantom Pain can all be put aside now as we were given a new and nice look at the game and features that have yet to be announced or shown in a public form. It also kind of puts the whole demo thing for Ground Zeroes to the side as with what was shown here at E3 was considerably more and with a demo you should get all of the game's mechanics and features. Yes the core running, stealth, and shooting are all the same but here is what we didn't get to play before but will once The Phantom Pain launches.

As far as story goes it is still a bit closed off for Metal Gear Solid V: The Phantom Pain but it looks like Big Boss is out to get the one up on everyone and you get to control that. This includes mustering your own army which we will go into here a little bit further down. Or, well you know what, no. We'll go into that now as that was a key feature that also eliminated one of the other key objectives that we have grown to love into the Metal Gear universe.

In Metal Gear Solid V: The Phantom Pain, as I mentioned, you get to build your own army of sorts. One of the way to get these new recruits is to attach a rocket balloon to the enemy and they will be taken back to Mother Base for, what I am assuming, brainwashing. As long as you are outside and there isn't a storm going on, it looks like you can do this to any enemy and also items. This means that you no longer need to worry about carrying the unconscious body to a hidden location and hope they don't wake up any time soon. They are off the map and in your ranks. The enemies having the ability to wake up and foil things was what added that extra bit of planning. Now it just looks like you are effectively killing them when on the map then you can have free reign.

While this does get rid of the extra difficulty on maps it does lend into the building your own army as well as Mother Base. Yes, you get to completely build your Mother Base in Metal Gear Solid V: The Phantom Pain. As well as train your recruits in specific roles that will help you when in the field. One of the big showcasing of this was that even though you may think you have 'tagged' all the enemies, if you have recruits with levels in Intel you can call up Mother Base and they will give you areas that could have more enemies that you personally missed. Or you can call in supply drops or artillery strikes. There were a whole bunch of options blacked out that we were not shown so it looks like that is vast.

Since it is kind of linked, as it came with a supply drop, the cardboard box is back and with a whole bunch of new features. You can sneak around still and hide in the box as with previous Metal Gear titles but in The Phantom Pain you can also pop out the top to snipe an enemy real quick and then back into hiding. Also, and this is the better of the features, if your box is spotted moving you can leap out the front of it at any time. As long as the enemy didn't see you hop out the front the box will stay behind and play decoy while you move back into stealth. That is a really cool and well needed feature.

Now back to the Mother Base thing. So we get to completely customize it from the ground up, or sea up if you will, and it gives us a few in-game features to help with the missions as we level up everything. It also adds on a multiplayer aspect to Metal Gear Solid V: The Phantom Pain as other players can attack your base. It wasn't better defined than that but the demo ended with an attack coming to the Mother Base and Boss having to flee the scene. So yea, multiplayer in The Phantom Pain. It looks as basic as get off the ship before the other player can kill you but I have a feeling that there will be much more to it when the game fully launches.

If Ground Zeroes didn't get me excited for Metal Gear Solid V: The Phantom Pain this demo certainly did. It has all the core elements that I have grown to love over the years. Even though one was taken out pretty much it looks like it was to lend to some other new and advancing features in the franchise. That is not to mention the multiplayer aspect that looks like it could be a whole lot of fun. At least if my personal speculation comes to light. Oh, and the horses poop while you are riding them…