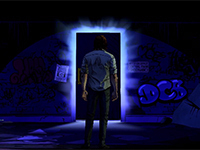 I guess I spoke a bit too early on Tuesday when it came to The Wolf Among Us' next episode release. Either that or Telltale is trying to mash as much into the week of E3 as possible. No matter the case it looks like In Sheep's Clothing will be hitting the digital streets as early as next Tuesday (5/27). We also have a nice little trailer to showcase this off for you as well as a bit of what to expect in the next episode of The Wolf Among Us.

Two things first. The official release dates for The Wolf Among Us are as follows.

The second thing is that the following trailer for The Wolf Among Us — In Sheep's Clothing is most likely full of spoilers for those who have not played any of the first three yet. Why you would be in here reading this story if you haven't played them or really cared about spoilers is beyond me but you have been warned so no bitching.

I am happy to see that Bloody Mary looks to have more of a role in this episode of The Wolf Among Us but outside of that and the weird creepy door of light this looks to be another boring episode that will leave in a cliffhanger. Almost guaranteed that Bigby will step into the door and then we will be hit with a 'Next Time On…' screen. I could be wrong but I have a feeling that I am almost right. We'll have to see I guess.

Not much longer of a wait now although it would have been nice to have something to play over the upcoming American holiday weekend. Looks like The Wolf Among Us will not be among those titles keeping my attention over this weekend. Just next week.