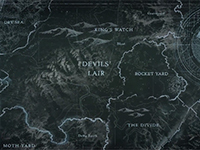 Here we go with some new Destiny footage straight off the PS4. In this case we get to follow three characters of different classes as they attempt to make a strike at the Devil's Lair. From the looks of the area it looks to be more inhabited by the Fallen and fewer demons or devils but Destiny is a sci-fi title and not a religious or fantasy title. Not that that should make much of a difference but I felt it worth noting for some reason. Moving on…

All of that aside we do get to see one of the mission types and areas of Destiny in a close up situation. It doesn't look like anything new or ground breaking as it is a "hold your ground" mission as the ghost tries to hack down a barricade while the team is rushed by a plethora of the Fallen. What did we expect though as Destiny still kind of follows the same pattern of the FPS genre? Pretty standard stuff if I do say so. That by no means means that I am still not overly interested in Destiny.

Also worth noting in this Destiny trailer is how graphically intensive everything looks. All running on the PS4 here so there is no real comparison that the internet and fan boys love but should we expect less on the next gens right now? I say not. Even if you are not into the generic style of the FPS that is at least something to get excited for.

Here's hoping for some good hands on with Destiny at E3 as this trailer also claims to be playable.