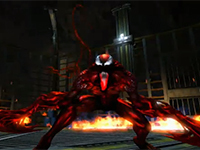 Earlier this month we got a trailer showcasing the villains that will be in The Amazing Spider-Man 2. During said trailer there was a possible glimpse of Carnage which was something of great speculation. It all made sense based on the short scene and how this game is supposed to stay semi-close to the cinematic universe that has been re-cultivated.

As the 'exclusive' trailer from MTV for The Amazing Spider-Man 2 shows, it can be confirmed for the game now. This is kind of a big deal for fans like me and for those who want to speculate more on the future of the films and spin-off films coming in the future. Although I have a feeling that I am one of the only people out there that is this excited about a single character in a film-tie-in video game.