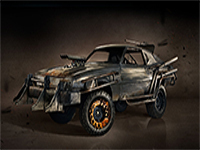 One could have had a baby in the time it has been since we last got a video look at Mad Max from Avalanche Studios and Warner Bros. That isn't too much of an exaggeration either. In fact it had been so long that recently I began to question if Mad Max was still being worked on or if it had been canned quietly so as not to have everyone asking 'Why?'. It looked amazing when I first saw it at E3 2013 and it looked like the dev team was well on the way to having a finished product soon.

The good news here is that it looks like Mad Max is alive and still being developed by the team. Below you will find the Magnum Opus trailer for the game, don't confuse that with the literal translation of the phrase as I am sure Avalanche wants to keep making games after. In this case you can read it as the vehicle that the titular character is driving around in the desert wastelands of the world. Hopefully you already knew that.

It may be the bit of time and my memory but I remember everything looking a lot more polished back at E3 when it came to the vehicles of the world. This Mad Max trailer looks to be a downgrade of sorts. Like I said, that could be my memory as my last point of reference was in July of 2013. When we do have wide shots everything looks film quality and it only really seems to degrade when up close and personal; something I expect Mad Max to be more of.

Here, have a watch.

I am also curious as to where Chumbucket is in all of these shots as well. For those who don't remember that is the kind of Max's companion who is also the mechanic for the Magnum Opus. He was featured in all of the gameplay I have seen as well as the past trailers. It just seems odd that in a trailer all about the car that the mechanic is nowhere to be found. I'm hoping that Chum is a character you have to earn through the story of Mad Max and just hasn't been cut for some reason. It was interesting and funny to see the two play on screen.

Also, as it has been almost nine months since it was shown, here is the Soul Of A Man trailer for Mad Max to spark the memory. You can also use it as a comparison if you so wish. Maybe I am just missing something…

Soul Of A Man Trailer