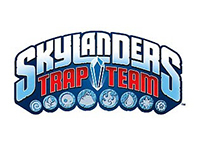 If there is one franchise that I know is a cash cow it is the Skylanders franchise from Activision and Toys For Bob. That cash cow is going to get a whole lot larger with the addition of Skylanders Trap Team this October 5th as we will get a slew of new heroes and a way to collect and play various villains. Yep, we are going to be able to start collecting the villains, including Kaos, but there is a catch. Pardon the pun.

The below trailer is a very stylized version of Skylanders Trap Team but it does show the new feature and "portal" that can be used in the game. It now will allow us to plug in a special crystal type toy where we can store the various enemies of the game and then turn around and play them. Sounds a bit complicated at first but none the less this is going to pave the way for even more hunks of plastic needed to fully experience Skylanders Trap Team. That will be a new set of 50+ toys to purchase for heroes and 40+ more that will be needed to trap villains.

I do love the concept of Skylanders Trap Team but when is enough going to be enough on the toy side of things? I mean really? If we disregard all of the earlier titles in the franchise and focus just on Skylanders Trap Team that is upwards of 100 new toys, if you want the full game experience. Good for the making money side of things but for those who have to pay that is a huge drain. I guess we'll just say it's for the kids and move on.

I look forward to Skylanders Trap Team mainly because I enjoy the story and gameplay mechanics and I am interested to see the new bit in play. I can see having a few trap crystals around but most likely not one for each villain. Unless I start collecting, leveling, then selling them online. Then even more money could come flowing in to help the toy habit I should have for Skylanders Trap Team.