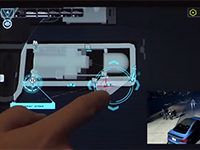 It has been ell know for a while that Watch_Dogs is going to have multiplayer aspects. Even before these gameplay mechanics were even mentioned there were views of it in the gameplay trailers. It is high time that we finally get to see what exactly we will get to be doing and hacking while playing the multiplayer of Watch_Dogs. In the latest trailer we get to see three distinct modes. Let me break them down for you before you skip on to the trailer.

First up we have the Online Hacking Contracts of Watch_Dogs. This is what many of us have seen to some degree as it is the mode where players can hop into another player's game and begin to hack Aiden. This will require the player being hacked to figure out who is doing it and stop them before they walk off with the sensitive information. The trailer shows an amazing rendition of this and how to 'out' the hacker. These types of contracts also look to pop up as instances during your actual gameplay of Watch_Dogs and not a specific 'lobby' kind of deal.

Next up is the ctOS Mobile App experience of Watch_Dogs. This requires you to be playing the game proper and another user to connect via their mobile device. There is no showing on how this is all initiated in game but the idea is pretty basic. The person on the mobile app has full access to the city and all of its 'hackable' items as well as law enforcement. They are geared toward stopping the player from completing specific actions. In this demo it is all about a race through the city. Since the player of Aiden will be in the game proper it kind of forces you to memorize the maps to make sure you are not taken by surprise.

Lastly is the Competitive Decryption Combat multiplayer mode in Watch_Dogs. This one looks more like the traditional multiplayer modes we are used to in other games. It is a modified version of capture the flag, when you break it down, within a four on four match. Players are needed to capture a file to decrypt while the other team is trying to stop and kill you before you do. Like I said, it is pretty much the same old staple that is used in every game and not just Watch_Dogs.

I am not the largest supporter of multiplayer in games but these modes, at least two of them, will add to the overall Watch_Dogs as I see it. Especially the hacking contracts if Ubisoft does a great job from keeping other players from just trolling. If I am alerted to getting hacked every five steps in Watch_Dogs I can see it getting tired quickly but that would be the worst case scenario. I'm going to err on the side that Ubisoft has that on lock down.

What do you think of these multiplayer modes in Watch_Dogs? Let us know below.