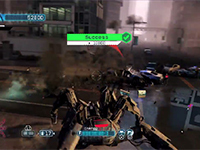 Man, Watch_Dogs really want to keep that moniker and title flowing after that amazing '95 film of the same name. I personally think cyber-terrorist or cyber-vigilante would fit better but it looks like we are getting a look at the 'future' of hacking yet again. On the plus side there is a whole slew of new gameplay on the PS4 version of Watch_Dogs so we can see how it will handle on the next-gen consoles before May 27th. That is a bit of a plus as things have not been so clear in earlier trailers.

Cliché title aside, this Watch_Dogs clip does give us a closer look at the overall story we will be playing though in the game. Or at least the motive of why Aiden is Hacking The Planet and turning the entire city into his cyber weapon. That sure sounds more like a cyber terrorist than anything but we'll go with the vigilante title still. Hopefully there is a great 'end game' as to why we are going all cybercriminal and not just another GTA in cyber space kind of thing.

The guys from Ubisoft do go a bit more into the profiler system in Watch_Dogs and it still boggles the mind that they were able to give every NPC a "personality" to interact with. They may move about and stay silent but all of the details that can come up with in-game results are pretty damn cool. I'm just curious if I can hack someone else's bank account and funnel the funds into the unemployed NPC's account for kicks. It a bit Robin Hood but that is how I want to play Watch_Dogs. Just like the "Hacker" title, that is another thing that the developers have kept saying in this video. Just like Burger King; have it my way.

Also, just cause it looks like I skipped over it, if Aiden is to be a 'modern day' hacker, how the hells is he hacking into a giant robotic spider. I could swear we live in the modern day and we don't have any giant robotic spiders walking around the streets. How does one live in a modern time and still be able to hack into future tech? That makes no sense. Maybe it should be modern day for the universe of Watch_Dogs instead. Either way enjoy the trailer.