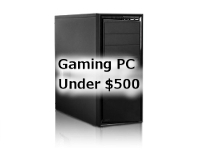 Our build for today is the under $500 gaming PC. We do have an honorable mention in today's build list which is the NZXT Phantom. I think NZXT makes pretty darn good cases myself and with it being less than $20 more than the case we picked out it will still come in under budget.

One of the best things about this build is the processor and motherboard we were able to squeeze in to it, the motherboard has up to a 32GB DDR3 1600MGz RAM capacity. On top of that it can support dual graphics cards. Personally I prefer one really strong card to two weaker ones but I am not everybody so the option to have a second card to pick up the slack is a big plus in the long run. Not to mention the power supply in this build is a modular power supply. It has an identical price tag to its non-modular brother so it is really just a matter of preference whether you want a PSU like that or not.

As the future of games is constantly approaching, the more modern titles are requiring processors with more and more cores. Most of them recommend you have a six core processor, so with an eight core processor you kind of get an early jump. Plus from the dollar to performance ratio for this processor is off the charts. Also if you are wondering about why I chose just one stick of RAM it is because most games recommended specs say you only need four gigs of the stuff. I know it is more common place to have eight gigs; even the last build had eight. At the end of the day though these builds are purely for gaming. Don’t forget that the motherboard can support of two 32 gigs to just slap in another four gig stick when you start to notice any drag in the future.

This build for me was a personal favorite of mine because the budget was finally big enough to get some really good stuff, and expanded options on what I can get with the money. While the GT 610 served me well, and handled the workload well enough, the minimum standard for a gaming PC I feel should be the GT 630 and all its equivalents. I really try not to reuse the same brands over and over but when I look the competitors they are usually $20-$30 more with little to no increase in performance and with these articles being solely about good budget gaming machines I sometimes don’t have a choice.

Until next time I hope you all enjoyed. Let us know if you try any of these builds out. Any questions, suggestions, or opinions please share them with us in the comments section below.