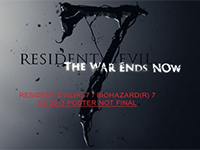 Yet another item I want to mark under extremely hopeful; Resident Evil 7 could be officially announced as soon as this June. You can read that as "At E3 2014" if the current rumors end up being true and not just economical speculation. It would seem that a Japanese newspaper has made just that speculation for us to sit and pine over. This is all based on the mention of a next-gen console and the popularity of the Resident Evil franchise. At least from what I could glean from the broken translation.

Which next-gen console? It should be no real surprise that the PlayStation 4 would be mentioned for the possible Resident Evil 7 to land on but there of course there was no speculation on exclusivity. Most like chalk that up to the Japanese culture and their love for the PlayStation but I digress.

In the end we won't know for sure until Capcom coughs up any official announcement for a Resident Evil 7 if the rumor is true. Hopefully at E3 2014 but I can see Capcom waiting just a bit longer. Resident Evil 6 came out only a year ago now and it could make sense that Capcom had the development tools to make a PS4 version of the franchise. That would explain why so many people were upset with RE6 as they were focusing attentions elsewhere.

But now, that is me speculating. Hopefully Resident Evil 7 will be a thing.