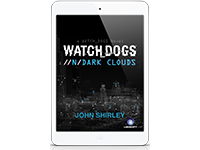 Watch_Dogs is still about a month out from launch and there is already a talk about a sequel to the game's story. This isn't another quick turnaround for another game in the new franchise but an eBook titled Watch_Dogs //n/Dark Clouds. Kind of an interesting way to go about it there but it does fit into Ubisoft's want for all IPs to be able to have a franchise built around it.

From what has been stated so far don't expect it to be just a continuation of the story in Watch_Dogs the game but a whole new story in the same universe written by John Shirley. All of you literature and cyberpunk fans probably know who that is but for everyone else, you can click here to get the run down on his past works. I don't have time to give you all the skinny there.

As of right now Watch_Dogs //n/Dark Clouds is slated to release on May 27th alongside the game proper. I think that Ubisoft should have pushed the release date out a week or two as I am sure most people will still be playing through the main story of Watch_Dogs and not care about the novel for at least that amount of time. Then again who am I but the target audience for the franchise? I guess having all the hidden videos and images in the eBook could keep me reading when not playing as long as there are no real spoilers for the game.

If you want to find out more here is the trailer for the eBook with a few more details. I guess we will find out if Watch_Dogs //n/Dark Clouds is a great addition to the launch here soon or if there should have been a delay.