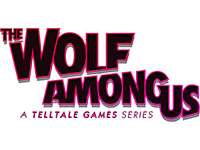 It looks like everything is back on track for The Wolf Among Us in terms of release windows. No waiting around for a few months to get the new episode as we got episode three in quite a timely manner. The only question is, does A Crooked Mile expand on the game's world and mechanics or just let us down again? Sit right back and I'll tell you the tale of my experience with The Wolf Among Us episode three.

Bigby is still on the trail for the killer in Fabletown. This time he is looking for the person who has committed multiple murders and not just the one for Ass Skin Faith. There is a bit of a funeral that goes all to hell and leads Bigby to the next piece of the puzzle as well as some new suspects. Also, there is a bit more on the "these lips are sealed" mumbo jumbo that has been plaguing the suspects and Bigby the entire story so far. Everything wraps this episode with Bloody Mary and The Crooked Man causing some strife as well as the prior suspect's motive being called into question. Spoiler free enough?

Just as with episode two of The Wolf Among Us there is a sheer lack of trying something new with the gameplay. In fact there seemed to be considerably less action and QTEs through the whole episode. Only the very beginning and ending really had anything that made me have to pay attention and keep the controller fully in hand. The rest of the time it was, walk here, click, choose something to say, repeat. I know Telltale has a lot on their plate right now but give us some kind of mix up that we have in The Walking Dead. This may not bode well for the other titles in the works.

Also, if you read the above "story" section you can see where I might be going here. If not, why is there such a build up for possible suspects in The Wolf Among Us if the most flimsy excuse will make everyone just give up the pursuit? Not only that, but everyone seems to be changing their overall persons just to force a "difficult" choice on us. One in particular dealt with Snow White, who has been helping the entire city thus far, forcing Bigby to burn down someone's source of income just because it makes us have to choose. Why is she the hardcore bitch now just to force this? It made no sense. It happened another time in a scene I won't speak of because of spoilers but it is happening too much. Consistency seems to have been thrown out to force moral choices on us.

If there is one thing I did love it was the inclusion of Bloody Mary into the story. I do love me some 'villains' if you haven't been able to tell yet. Even though she is only in the story for the closing five to ten minutes, Telltale wrote her and the scene extremely well that I can't wait to see what she does next. Or how horrible of a 'villain' she may end up being. Currently she seems to be a mob enforcer type for The Crooked Man who is just sheer bad ass. Hope I didn't spoil that all too much but Blood Mary was one of the things I love about The Wolf Among Us' third episode.

In the end let's face it. If you haven't purchase the season pass for The Wolf Among Us I would say give it all a wait to see if the entire season ends up being decent overall as some bad episodes could just plaguing everything right now and the conclusion could be worth these "filler" portions for an amazing ending. If you have the season pass for The Wolf Among Us then you have most likely already downloaded the episode and are just looking to have your own thoughts validated or questioned. Hopefully the above has done just that and you too are hoping for a stronger ending with better gameplay features added in.

The Wolf Among Us was developed and published by Telltale Games for the PS3, Xbox 360, and PC and Episode Three released on April 8th, 2014. A copy of the game was provided by the publisher for reviewing purposes.