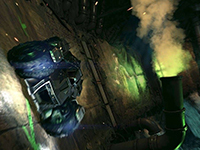 Back to the Batman: Arkham Knight stuff.

Now while we have the same tried and true villains we've been shown mixed in we do get a fun look at one of the Riddler Races, as I will dub them, in Batman: Arkham Knight. That and a lot of Batman being Batman in Gotham. It is interesting to see that the Batmobile will be driving up walls to get past obstacles if the images below are of the correct perspective for the scene at least. I don't know why The Riddler would have his face displayed on the ground so that makes sense but who really knows at this point?

I am also digging the look that Rocksteady has for Oracle here in BAK too. It makes me think of how I would deck out my wheelchair if I was unfortunate enough to have fallen into her fate. It really grounds it in a reality I can get behind even though it is all a fictional world.

I'll shut up now and let you gaze upon all of these new and old screens for Batman: Arkham Knight now. How are you liking the way things are shaping up?