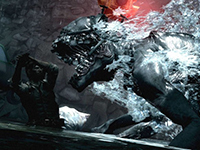 We may not have more news for The Evil Within but we do have a few new screen shots for the game. I wish I had more given all of the bad "previews" that have been abound the internet from the other sites that require payment to give good news; but I don't. Instead just these four new shots that kind of show off a bit of the atmosphere and enemies in the game. At least both are perceived to be enemies and there is nothing more than the huge fanged monster roaring Sebastian and the other is Boxman.

Wouldn't it be awesome if the big toothed thing was actually an ally of some sorts in The Evil Within? It's doubtful but it would add a new twist into the horror realm where not every huge monster is out to ruthlessly murder you. Especially something like that. I'm going to just have fun and say that he is helping Sebastian as the water seems to be flushing him away and maybe he just needs motivation. Run, Forest Run kind of motivation but motivation none the less.

Either way, here are those mentioned shots to hold us over until we get more substance for The Evil Within.