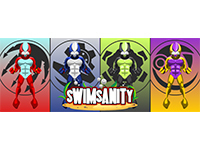 Decoy Games presented a deep sea adventure in their very first piece of work at PAX East this year with SWIMSANITY. This underwater fighter gives you Co-Op, Deathmatch, CTF, and more for up to 4 players; with optional team settings for the competitive modes. With a fast-pace movement, teleportation, and unique unleashes SWIMSANITY has plenty to offer for friends both sitting on a couch or crosses state lines over the internet.

SWIMSANITY puts you in the aquatic soldier body of a Mooba, a combative creature equipped with a magnitude of weapons. Able to fire from the arm, Mooba’s build their unleash meter by causing damage. Once the meter is filled the Mooba is able to use their special selected by the player prior to the match beginning. While playing SWIMSANITY demo allowed for three others and myself to enjoy massacring each other within moments thanks to well set-up menu system that were very fluid. The 2D design was quite beautiful and it gave the game a very retro feel it takes you back to the days of River City Ransom, Mario Bros, and other magnificent adventures.

SWIMSANITY is expected to be released during January of 2015. While the game will be dropping for PS4, PS3, PS Vita, Windows 8, and Mac it will depend on the Kickstarter that is asking for a higher level of backing to port the game further. SWIMSANITY is also planned to receive further DLC to keep your feet wet for even longer. For those interested in this game the Kickstarter can be found here and doesn't end until May 22nd.