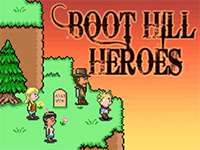 Experimental Gamer showed off the second part to their RPG trilogy Boot Hill Heroes at PAX East this year. They initially started this back in 2012 by Kickstarting the first game reaching a goal over three times the goal amount. With successful funding the series has been moving rapidly beginning to pan out from the PC download to Xbox Live, PSN, and Steam. While of the three platforms only the PS Vita currently has access Xbox Live Indie is in the works with Steam awaiting the Greenlight.

Boot Hill Heroes uses the traditional final fantasy format for fights with a turn-base combat that allows for you and up to three friends to engage enemies in. Unlike Final Fantasy and many RPG before it, classes are not assigned at the point of creation. Thanks to “Job Hats,” these wonderful little things will not only allow the character wearing them to learn new skills but will also have the added effect of changing the appearance of the hat they wear. The game creates intense boss battles that while posing an incredible challenge end with a satisfying and rewarding victory.

While at PAX East not only did I get a shot at playing the demo for part two but my co-op partner whom joined me was David Welch himself. He walked me through a lot of the different elements of the game; time shifts to how important conversing with NPC is, all the way to my first two boss battles. After we finished the first boss with a fair amount of ease we made our way towards the second one. This is where we managed to hang a few rounds but ultimately parish.

Boot Hill Heroes will challenge you. It will give you the classic RPG feel while submersing you into the Wild Wild West and is nice enough to let you ride the saddle with your buddies. The second installment in the series should be out this year until then, enjoy part one on PlayStation mobile with added content.