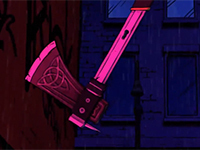 Finally, The Wolf Among Us brings us something that isn't an April Fools' joke in the form of a new trailer for the third episode of the game; A Crooked Mile. Something I have been waiting for all day and technically almost two months now; something new for The Wolf Among Us since the last episode is the larger of the two. The lack of April Fools' joke is just a plus.

New gamers to The Wolf Among Us be warned; there are a few spoilers mixed into the trailer as it continues off from where we last left Bigby. Not too many but just in case you don't want to have a bit of the end story of episode two ruined you may want to steer clear. For everyone else, this looks like it is going to be a more action packed episode for The Wolf Among Us. More than we have ever been used to and this is something I am very excited for.

In past episodes of The Wolf Among Us the action kind of felt slow and limited to a few button mashings. A Crooked Mile just looks like there is going to be some insanity mixed in based on the trailer. That is what the trailer is supposed to do, get us all hyped, and I hope I won't be let down once it all goes into practice. Especially since the story has taken a very predictable stance for my tastes.

No matter though, here is the trailer. If Telltale keeps to their usual release window to trailer model we can most likely see The Wolf Among Us episode three out in the next two weeks. We'll see.