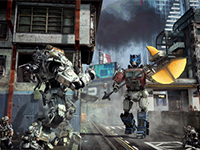 This new Titanfall April Fools' joke is exactly why I loathe this "holiday." This looks amazing and would actually have me wanting to keep playing Titanfall for quite some time; especially if this Optimus Prime DLC was real as well as lead to other Transformers DLC for the game. Yep, their fun April Fools' joke was DLC that looks awesome and will most likely never be. Here watch for yourself.

Did you get all excited at how cool that all looked? I especially loved the view from inside Optimus' chest while piloting but unfortunately this is as close as we get to the Titanfall DLC.

It is interesting is that the Transformers video game franchise is an Activision property and that Respawn would choose to go along with this joke so close to all of the law suits that they just finished with the publisher. This is also another reason why I am sure that we may never see this DLC outside of this joke. Granted, Hasbro can license to whoever they want but it is just funny to see that Respawn used one Activision's staple franchises in their April Fools' joke. Then again, I may be one of the few people who caught that.

Either way, here is yet another reason to hate April Fools' Day as this Titanfall DLC was awesome and will most likely never see the light of day. Unless they try to do some tie-in when the new film comes out. Makes you think and hope doesn't it?