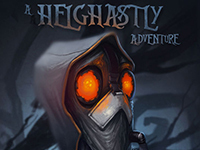 I guess we are letting the 'fun' of April Fools begins early with The Killzone Movie: A Helghastly Adventure. Just in case you missed this, over the weekend this 'announcement' was placed on Killzone website for all to see. I personally think someone pulled the trigger too soon on posting this up on their blog but here you have it; the first of the April Fools' jokes that you all know I love so much.

If this is not an early April Fools joke then I am a monkey's uncle. Let's take a closer look at see how this shouldn't be taken seriously. Here's the 'poster' and description for The Killzone Movie: A Helghastly Adventure The bigger elephant in the room is that there is a trailer planned for April 1st, so it looks like the joke will continue. Then there are all the misspellings of the director and actor's names. Then to go one further, do you really think that Sony would green-light a film like this for one of their flagship titles? Especially for a studio that was recently hit with some layoffs? They would want to go big if history and near-future productions are any proof. I just hope this isn't the big punchline for the other game films announced. I'm talking Heavenly Sword and Sly Cooper for those who may have missed those announcements.

Usually my distaste for April Fools' Day jokes stem from the fact that most of the time in the gaming industry some of the ideas are amazing and will never be made. The Killzone Movie: A Helghastly Adventure is not one of these ideas to me but it is the start of what is going to be a pretty crappy week where we have to sift through what is really going to be made and what is not. I am still not sure why everyone even bothers wasting the time on these…