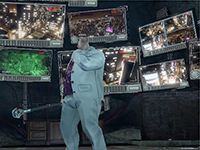 It is a rare case when film-based video games get any praise and if you've been around here for a while you may remember that The Amazing Spider-Man has been one of the best so the sequel should be of the same high quality. From what I am seeing and hearing below it looks to be like it is improving and kind of moving away from the film even more so. Almost like they are keeping just the The Amazing Spider-Man 2 title and characters the same between the two. No complaints here either. But what else looks to be changed and upgraded for us who want to have an expanded Spider-Man experience?

Of course all of this is detailed more in the following video but it looks like the web swinging mechanics have had a change. From the sounds of it Beenox seems to have added a level of difficulty to the web swinging in The Amazing Spider-Man 2 to add onto the basic version from before. Now you have to actually anchor your webs to buildings and use the trigger buttons on the appropriate side of Spider-Man as well. No more swinging from space or nothingness. I am sure this will add a bit of a learning curve on the map traversal but it will add a bit more of real physics to the game world. I am interested to see how it handles.

Speaking on levels and the world, it is still a sandbox environment but this has been expanded into specific missions in The Amazing Spider-Man 2. Before we had long hallways or specific paths laid out for Spidey to crawl and swing through. Now we will have open levels to attack the enemies how we want to or how we think Spider-Man would while being controlled by us remotely. This is one of the more important additions to me. It always bugs me when I can see the impending ambush but have to walk into it anyways as the level isn't designed for us to outsmart the AI. This is shown in greater detail below as well.

Now the next interesting addition for The Amazing Spider-Man 2 is specific characters from the comics that have not shown up nor been mentioned in the film versions. The first go around Beenox did this by staging the game after the events of the reboot film. There were links between everything but that was about it. Now we have Kraven and Kingpin shown as well as the fact that we will get to actually play as Peter Parker in game. Yes, I consider him as a new character as we usually just focus on the alter ego hero and not the struggles of the poor photog and his aunt.

I'll let you watch in peace now. I am super excited for The Amazing Spider-Man 2 as I think it will just add to the growing franchise as well as toss the shackles of the film based game stigma; even though it is looking to be more of just a title and release date link at this point. Now if only they would bring in the Punisher…