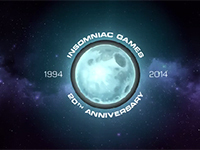 With all of the closures and layoffs that have been all over the news in the last few months it is reassuring to hear that Insomniac Games has made it 20 years running now. Yea, it's crazy to think that we got Disruptor and Spyro just about twenty years ago. Hells, it is crazy to think that 1994 is just about twenty years ago. Don't we all feel a bit old now? Except for all you young people who were probably born after Insomniac Games was founded.

To that half of the crowd you most likely won't get the first half of the below "music video" celebrating the many years of Insomniac Games. Yes, you did read that. Insomniac Games has made a music video of sorts celebrating the years in business as well as all of the titles that we have all enjoyed from Ratchet & Clank to Resistance to Fuse. As a spoiler alert they do have a few funny facts mixed in that could potentially spoil some of their game's stories but it has also been years since those titles came out so you should know all of this.

I do find this video, like I said, as a nice pick-me-up from all of the sad studio news lately but I also find it fun to watch the employees in the background. Some of them look like they were told minutes before the video was rolling just to stand around and have fun or dance. None of which look very well thought out. That is also me enjoying what isn't the main focus of things in videos and movies. It is fun to see what gets past editors sometimes or what they leave in just as a fun joke.

Here is the video so you can join in the excitement of Insomniac Games reaching a huge milestone. Irrational couldn't even make it twenty years. I'm just saying…