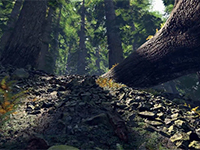 This is going to be yet another of my famous, I wish, talks about game engines and where they have advanced; specifically the Snowdrop engine again. If you are unfamiliar with the Snowdrop engine, it is what Ubisoft and Massive have built for the upcoming title The Division. I've also pined over this engine a bit in the past and it will keep going like that as we keep getting videos that show off its power. The kind that I have provided a little bit lower.

Hopefully you haven't just skipped off to watch for the few seconds of The Division's gameplay and are still reading. If you are, thank you. If not, a pox on you and your family. Now we move on.

So the following video has been some of the first looks at how the amazing Snowdrop engine handles behind the scenes. It looks just as easy to use as the Unreal and Unity engines from my experience. The big difference it would seem is that it doesn't require scene compilation to show you what is going on during changes. That is if we are to believe there was limited editing for this video. But if it is the case we developers can make massive changes on the fly with the Snowdrop engine and truly see how it will affect the game world before saving and committing our changes. That is if the engine will be open outside of Ubisoft.

The next big point here is that the Snowdrop engine is also looking like it is keeping its amazing graphics processing to all environments and not just cityscapes. Usually this is an issue as most naturescapes and environments have so many random aspects that it feels unnatural in game. Cities not so much as man made things are usually uniform. It's another subtle thing to catch that will fool our minds into believing the game world is real and not artificial. Or the term immersible would work as well. The thing we all crave in games that are not just high paced shooters.

Enough of boring you though. Here is the new clip straight out of GDC for the Snowdrop engine. Also just to see if the fans of The Division are still reading, you will get maybe 30 seconds intermixed in. So enjoy it.