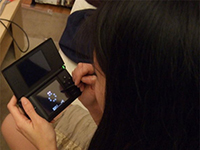 Now here's something positive coming out with all the negative press the gaming community gets. And Gods know we need it. But in any instance, a man decided to find another unique way of popping the question to his betrothed. He hacked into the DS and created a version of Bejeweled and sent it to his love. She opened it, and start playing the game only to find that after racking up a certain score, the screen shifted and a grouping of blocks in the shape of a ring dropped onto the screen. That's when he actually asked the big question. Her answer…"Of Course!" Match made in Virtual Heaven.

This brings up a couple of things to mind after reading this, is it the fact that it was done in game form or the fact that he actually took the time to code and design the whole thing from scratch that made this the best kind of proposal? Personally, I would say it is the fact that he listened and took great care to make the perfect plan by spending weeks setting this whole thing up. So guys, remember that and you can most likely win their hearts. Okay done with the mushy stuff. Back to my pretend bad ass persona.

PS: I'd love to hear what you guys think up this form of proposal.

PSS: Totally had the idea of doing this in GTA or UR. Only when there was a head shot, the blood sprays onto the wall with the question. /Reasserting Bad Assitude