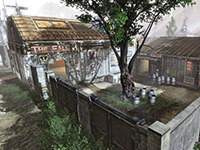 With only weeks away from Titanfall's launch it would seem to make sense that we would get some 'leaked' screens or info. Between nefarious reviewers, stores breaking street dates, or any other myriad of ways people have been able to get gold copies of Titanfall something has to be 'leaked'. I see it all the time and everyone is all "holy hells, new info we wouldn't know for another week or so!" Sorry for the rhyming.

Back on topic, if you take your gaze below you can see a bevy of new screen shots for Respawn's Titanfall. They show case a few new maps and areas of the game, what looks like some alien creature, and the use of zip-lines by the pilots being used to traverse said maps. Yep, looks like we are getting zip-lines mixed into the game play of Titanfall.

I'm not sure how that is really as big a deal as many other sites are making it but apparently they all think you should be looking for your socks as they should have been blown off. To be honest, the addition of zip-line traversal to Titanfall makes it seem like it is lifting aspects of other free running, FPS titles out there and letting you ignore the fact that you will be playing a pilot that can run on walls and 'summon' huge fighting mechs from the sky.

I see this as more of a hype move now that Titanfall has gone gold and that these were 'leaked' by the developer or publisher to some degree. Who really gets excited that you will be able to hop on a rail and slide into your enemy's cross hairs easier or use it to grief players who don't know the maps all that well? Maybe that is just the cynic in me though. Either way, here are those new screens to look at until March 11th.