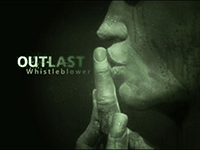 Just in case you haven't crapped or pissed your pants enough playing Outlast, Red Barrels Games has just announced new story DLC, titled Outlast: Whistleblower, to expand the world and the horror. At first thoughts I have a few reservations about having story DLC added on so soon, at least in the PS4 realm, but why don't we take a look at what Red Barrels has stated the Outlast: Whistleblower DLC is all about. I've added it below for your viewing ease as well.

So there we have it. Whistleblower is going to be a prequel and a sequel of sorts. So in the end of it all we can look at Outlast as being the middle of the story. Which is where my reservations on this DLC kind of crops up. While I am sure that most people enjoyed Outlast in general, and for free for those who have PS+, does this DLC kind of signal that we didn't get the full game at launch? Should all of those who paid for it on Steam or because they didn't have PS+ feel a bit shafted? Outlast wasn't that long of a game and now in April we are getting hopefully a few more hours added on with the Whistleblower DLC. Why was this not planned in total? Granted this is also me speculating that this is going to be paid DLC. If it is not and Red Barrels gives us all the Whistleblower DLC for just playing their amazing game then I will take this as a "we needed more time to get these sections perfected and wanted to get Outlast, in general, out." That I can get behind 100%. If that is going to happen is anyone's guess. That's enough 'soap boxing' for now. Let's get to the other interesting facts here.

So we will be playing a software engineer at the asylum this go around. Will Weylon be using some digital camera that he has found or will he have his own tools of the trade to get around? If it he does then that smells like new gameplay mechanics and strategies which I would also agree would make my above concerns moot. If I had to guess on a new kind of mechanic I would have to say maybe a smart phone. It would be a bit of a stretch to get the night vision aspect that is used in Outlast but it would fit the role more of a software engineer who has been trying to contact his wife.

Also, what may be keen to think about, as the story of Weylon will go past that of Miles; do you think there will be crossover of sorts? Like Weylon watching Miles from a hidden place? Hoping that he could help but has to make the hard choice to stay silent while Miles runs for his life. Could lead to some interesting storytelling if I do say so myself; which I do. I guess we will have to wait a little bit longer for all of that though. April will come soon enough though and we'll have more on Outlast: Whistleblower.

Anon Commenter [ Saturday, 22nd of March 2014 - 03:43 AM ]
Well it was stated in the game by father, wel he says once if you pay attention, "Child your no the only innocent soul in this asylum, someone else is here ive seen them." so i guess it could be weylon
Go ahead and login or register