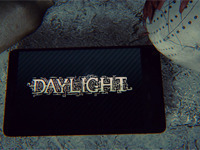 Big news horror fans and those looking forward to Zombie Studios' procedurally generated, survival horror game Daylight. First off, we finally have a release date. Looks like we will all be getting our pants filled with crap on April 8th this year. Right before Tax Season in the US. So we will all have double the reason to require fresh panties this April. Looks like I will be buying stock in Fruit Of The Loom.

Next up, and this is pretty killer, is the news that while you stream Daylight any user who happens to be watch will have the ability to scare you, the player. Think along the lines of Twitch Plays Pokémon but with users able to queue up everything that will jump and scare you in the game. This seems like a troll's best friend when I hear about it but I can't help but think about being the one controlling the extra freak outs to an unsuspecting player. If all of this plays out as Zombie Studios and Sony want then you will need to be on your toes anytime you see TheRealHades is spectating. ALWAYS ON YOUR TOES.

Last up, and I saved this for last in case you don't want anything at all spoiled for Daylight, we have two new areas described for the game; the Prison and the Forest. As you should already have assumed they are areas built to look like a prison and a forest. Here are the exact descriptions given for your enjoyment though.

So there we have it. Quite a good chunk of news for Daylight. If I wasn't already excited to dive into Daylight after having enjoyed Outlast (same style of game, different studio and not procedurally generated), I would be now. The fact that there are plans to allow me to put the fear of the gods into you while you play Daylight alone has sold me. Everything else is just icing.