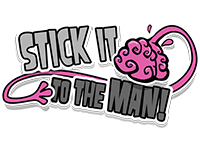 Who hasn't wished they had to ability to read people's minds, or moves things with their minds, or rip someone's teeth out of their mouth and put them into someone else's mouth? Ok, maybe no one imagined doing the last part, but now you won't have to. All this and so much more is now possible in Stick It To The Man! Read minds, grab thumbtacks all over the world to access higher platforms, pick up various objects and ideas to solve various puzzles.

Zoink!, the studio behind Stick It To The Man!, is an award-winning developer and creative content studio located in Sweden. They have worked on several games on mobile platforms, handhelds, and home consoles. They have also done extensive commercial work for Nike, LG, and other companies and brands. Stick It To The Man! is their first game to be released on PS3, PS Vita, and PC, with their previous titles having been released on iOS, android, or Wii.

Stick It To The Man! is a 2.5D puzzle platformer that places you in the shoes of Ray, a hard-hat tester, leaving work for the day. The game immediately gives you control of Ray and prompts you, by having Ray talk to himself, to head home. As you progress through this first stage, you are greeted with a cut-scene of a military transport plane that is passing by overhead. The plane hits turbulence in a thunderstorm and drops a tube containing an alien specimen, which falls and hits Ray in the head, putting him in a coma. In his dream he uses a spaghetti like arm that extends from his to pick up objects, pull himself up onto higher ledges, and to reshape the dream world around him. When he awakes, he finds that the spaghetti arm from his dream is actually attached to him in the real world, and with it he is able to read the minds of every living creature he finds. But, the government is looking to get their specimen back and is currently hunting for Ray and whatever broke out of the container that hit him.

Stick It To The Man! is paced about as fast as you can move, and the only enemies in the game that you have to avoid are only slightly faster than you are. The game feels like an interactive cut-scene and doesn't require any heavy thought, since most puzzles give you a hint to what you need to do, and since there aren't a lot of interactive objects to pick up and place, you can trial-and-error your way through the game. The only way you "die" is if you get caught by something chasing you, or fall off a platform into the abyss under you, where you then respawn at the last printer you walked past that works as a checkpoint. The various NPCs that you come across do have some fun monologues going through their minds, making readying everyone's mind a sure-fire way to maximize your enjoyment of the game.

The art style ranges from dark, dreary cityscapes to bright and colorful dream worlds. The 2.5D world is very heavy on depth and the puzzles keep you moving back and forth through the background and foreground. The maps progressively get larger and add more NPCs to interact with in each chapter, making the idea of having to backtrack to complete puzzles dreadful. Luckily, the devs foresaw this and added various tubes that open up as you progress from one end of the map to the other to make backtracking much easier in each chapter. The controls for Stick It To The Man! are simple too. Using WASD to move, and the mouse to target what you want to interact with. Holding right click or the E key will allow you to use your telepathy to read the minds of nearby NPCs. You can read the minds of various enemies, but the game does not pause meaning they can still catch you while reading their mind.

Stick It To The Man! is great for people looking to kick back and relax while playing a game. It is currently available on Steam, PS3, and PS Vita.

Stick It To The Man! was developed by Zoink! and published by Ripstone. It is available on Steam for $15 USD and PSN for $13 USD. A copy of the game was provided by the Publisher for review purposes.