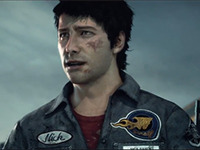 Here we go with another Story Time and this time we dive into Dead Rising 3. Why not? It is coming out here shortly with the Xbox One and deserves to show us what it has. Right? I am saying so, so it shall be. Let's see what this one and a half clip has to show us.

Wait, the Dead Rising 3 story trailer is only a minute and a half? Less than that if we take off the logo and "only on Xbox One" that are always slapped on as well. Alight, let's give it a go. Maybe it is all really nicely wrapped up in a small package with enough for us to digest and get an idea of what is going on if we had no clue before.

So, it is just another survive the zombie horde, get you and your friends out of 'Dodge', and a weird 'you could be the cure' kind of addition. That is also if you want to glance over what looks like a Mad Max kind of thing mixed into the world of Dead Rising 3. To be honest I think that is not even that far of a stretch given the game's world, but did you get anything more from this trailer than that? Isn't this supposed to be something to sell all those people who have no clue about what Dead Rising 3 is about? I mean it is more than just another 'survive' kind of game.

Good thing that we all know it is a bit more than that. Hopefully. Either way it is at least something fun to get us all ready for when we can get to play the entire Dead Rising 3 story unhindered on the Xbox One next week.