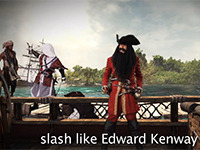 This brings me to the topic at hand.

If you have been living without the internet for the last few years you may not be knowledgeable of the comedic we phenomenon of Epic Rap Battles Of History. They pit two historical, fictional, or topical figures against each other in, as you guessed it, a rap battle versus each other. This week's battle (brought to you by Ubisoft) is Black Beard versus Al Capone. You can see it below if you are so inclined. But let's make it clear this is more or less something to promote Assassin's Creed IV: Black Flag and outside of the usual, in my opinion, for the group. In fact, this has to be my least favorite of them all so far and they once had Genghis Khan rap against the Easter Bunny.

Why am I bringing it here then? Well, because I enjoy the show so much that I want to spread the joy. Yes this one is a shameless plug for Assassin's Creed IV: Black Flag so it is topical for the site, but these guys also do loads of research and make these damn entertaining. It's also not the first time they have used video game characters as well so we can hopefully expect more from them as they seem to be fans of the culture. I can hope. Either way, enjoy the homage to Assassin's Creed IV: Black Flag mixed in with some facts from the real world.