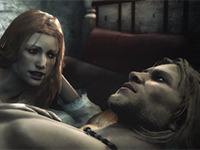 As usual, I will let the video explain more as I am sure it is the way you like it but Edward's story doesn't sound all that new to the Assassin's Creed franchise at all. Just your average man doing what is popular at the time. His family or loved ones are murdered and he is brought into the life of an assassin. A life that is only a little bit off from the life of piracy for Edward. Kind of the same as all the other protagonists if memory serves, but I guess it works as we are at Assassin's Creed IV now with others already in the works.

I do have to say that it does look like Assassin's Creed IV: Black Flag is taking a couple pages out of the things I loved in the Pirates Of The Caribbean films in the aspects of world politics between the upper-class and lower-class. Even if it is only hinted at mostly here in the trailer, I am damn sure there will be more of it as the story progresses. I mean, it kind of has to right? That is what was supposedly going on back then that forced men into the life of rum swigging, whore humping, and booty plundering right? I'd like to think so.

Either way, enjoy the latest trailer for Assassin's Creed IV: Black Flag and anticipate the launch on October 29th. At least it is one launch title that we know isn't being delayed.