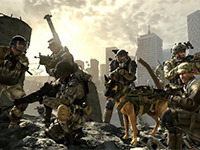 What is Squads? Well according to the below trailer, this is a whole new set of modes for single player or multiplayer where you get to build your own squad and pit them against other player's squads or AI squads. You can set everything for each member of your squad from load out to skills. What is kind of cool is that some of these modes allow you and your friends online play as members of your squad at the same time. Also you can try and take down someone else's squad while they are not online. Hells, you also can gain XP for someone trying to take on your squad while you aren't even playing Ghosts at all.

I'll let the video break things down better for you and list out the basics for the new modes below as well. This seems like a cool way to allow for people to still partake in MP while not being left too far behind because they have other games they want to play or real life to live. I know I will be taking advantage of allowing people to complete against my AI squad while reviewing other titles for you on the site.