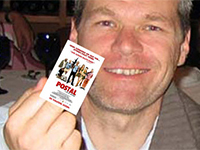 Uwe Boll lives in some alternate universe and I don't know whether to laugh or to pity him. But since he's making a ton more money than me making crappy movies, I'll laugh at him.

Uwe has put Postal up against Indiana Jones and the Kingdom of the Crystal Skull on May 23rd of this year. Most people wouldn't be crazy enough to go up against Indy, but horror website Bloody Disgusting got a quote from him in an email where he thinks he's going to take down Spielberg:

Of course Spielberg hasn't addressed the claims yet. Seeing that the lifetime gross for all of Boll's games are equal to one weekend of a Spielberg movie, my bet is that he won't.