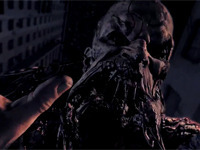 The feature I am talking about is the dynamic side missions. In the below video you will see a side mission with a little girl in a closet. In the showing I saw, she wasn't in the closet but on the bed. I know it isn't all that different, but as I was informed back in June this could have been a completely different side mission all together depending on the play through. As was the description, "It could have easily been another survivor who had just holed up in the building with infected clamoring to get in." Hopefully this will be shown in more detail moving forward.

Everything else played out just the same, sans our demo player being a bit more cautious and going into less combat. But at least here it is shown that we can actually free run on the heads of the infected. Albeit, they only show a max of two or three you can run on, but I can only imagine running over the entire freeway of infected without touching the ground. At least that is the dream.

So feel free to take a gander at the extended gameplay footage of Dying Light below. It really is a mix of Mirror's Edge and Dead Island; something that could really pay off. Now hopefully we will get to know soon when we will get to see it in its full gold-ness at home. It still is sitting with a 2014 release window.