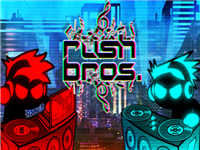 Rush Bros. takes place in a world where music is synonymous with life. Everything is directly influenced by the music playing around it. Beat and Treble, two brothers who rule the world with their creative DJ styles decide to break up and go solo. The break up does nothing but boost their own personal fan bases, causing a company to decide that the greatest thing for them to do would be collaborate with each other, through competition.

Rush Bros. features a two person multiplayer that can be done through local split-screen or through online multiplayer. The game also allows cross-platform play between Macs and PCs. It features incredibly bright, and vibrantly colorful graphics that can make the game a little hard to handle on low-powered systems but won't cause more than a very small input delay and slight visual lag. I was able to run it on my laptop with minimal issues, and my laptop was not built for hardcore gaming.

Rush Bros. can be played alone, through single player time trials. After completely a stage in single player, revisiting it will show a ghost of your best time giving you something to race against and keep track of how well you're doing. There are also switches allowing you to speed up the game play or make it so dying will force you to start from the beginning adding an extra challenge to train against. The game has its own in-game soundtrack consisting of electronica music from Black Parrot, Infected Mushroom, Ambolt, and Animal. You can also create a playlist to play with from your own music library on your computer. The music controls how fast traps, ledges, and other aspects of the game move. Some objects can be touched while others will kill you upon contact, forcing you to pay attention to what's ahead of you. There is a trick to identify what's safe and what isn't but I'm not going to spoil that for everyone.

Rush Bros. currently has 41 stages, include a tutorial stage, that features traps, doors, levers, and power ups that can be used to help or hinder your progress to the end of the stage. DLC is already in the works to add more stages and other content to the game. There is no news as of yet about if players will be able to create their own maps and share them through Steam Workshop but I am keeping my fingers crossed in hopes that there will be. Rush Bros. currently retails on steam for $10 USD with a special 2-pack for $15 USD so you can give a copy to your friend and then proceed to leave them in your vibrant musical dust.

Rush Bros. was developed by Digital Tribe Games and XYLA Entertainment and published by XYLA Entertainment. The game is available on Steam for Mac and PC at $10. A copy of this game was provided by the Publisher for review purposes.