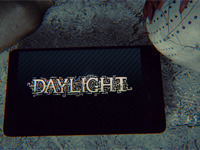 If you want to call it a trailer, then you can see it below. Don't expect much unless you plan on going frame by frame to try to figure anything out. It is simply just a showing of the environment in what looks like in-game graphics, at least for the Unreal 4 engine, that ends with a doll exploding and the protagonists phone on the ground. In fact the only glaring new piece of information that is easily snagged from the clip is the fact that it is going to be coming to the PS4 as well as the previously announced Steam version.

Since first hearing about Daylight back during PAX I was a little bit intrigued, mostly to see how the Unreal 4 engine handles, but also to see how the other core mechanics would work. Oh, and then there is the horror aspect that I am always a sucker for. I truly hope that we can get more information at E3, but then again I also hope that the developers keep playing up the cryptic and secretive that we have already written upon.