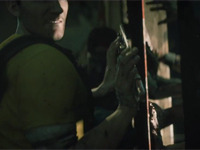 Watch and enjoy the trailer and I'll throw out my speculations afterward.

So we all know that Dying Light is going to have a free running aspect to the game. The above video shows how cool it could look but what it also implies is that there will be more use for it than just escaping for your life. For instance, why is there a plane dropping in cargo specifically for the "survivors"? Could it be that this isn't a full on outbreak and some kind of show where survivors have to get to the cargo first if they want to survive? Or is this some kind of tease about a multiplayer aspect that has yet to be announced?

The multiplayer thing could make sense given the "camper" next to the cargo near the end who takes out the protagonist of the video. Call it a 'last man standing alive' kind of thing. Kind of like the Hunger Games with zombies.

Granted this is all speculation and idea spit balling based off a trailer that was most likely made to get us pumped about what they will be showing at E3 but all of Techland's recent games with CGI trailers have had some influence in-game. Mostly Easter Eggs of the characters in the trailers, but who knows? This could be a sly way to make the announcement. Or I could just be extrapolating off a basic promotion.