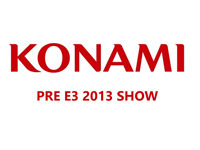 Here is a short over view but if you don't want spoilers go ahead and jump on down to the video.

There were three big titles that were the main focus of the whole event, Pro Evolution Soccer, Metal Gear Solid V: The Phantom Pain, and Castlevania: Lords Of Shadow 2. Out of those I would have to say the biggest news would have to be the photo-realistic endeavor in the way of graphics on MGSV and that Kiefer Sutherland is the new voice and motion capture model for Snake. Interesting news even though I had grown accustomed to David Hayter.

Continuing on to Castlevania: LoS2. This was the big focus of the last third of the event, with new game trailer. The big focus as it would seem is that the game picks up with Dracula (main character) continuing the story after the first game's prologue. If you haven't played it, then watching the trailer and story synopsis will spoil it for you. On top of that, and the announcement that Patrick Stewart will be reprising his role from the first LoS, is that we will no longer be forced to have a stationary camera angle and the world will be completely open with no load times. The two banes I hated in the first.

If you are still reading here, I thank you, but you should watch the whole event for yourself. If anything, just to see the visuals I spoke of above.