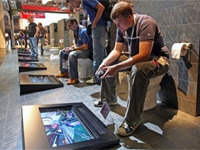 What is the big news here then if it has already been defined this is a feature? Well it seems that according to developer sources of Digital Foundry's Vita Remote Play is mandatory for all PS4 titles. This was later confirmed by Shuhei Yoshida (President SCEW Studios) via twitter after a questions surfaced.

So as long as the game doesn't require the PS4 Eye I am good to go? I like the sound of that. Looks like my Vita will actually start getting more use than it does at the moment. That is as long as most titles don't try and use the PS4 Eye for some cool immersive controller use. That is one of new features with the Dual Shock 4 isn't it? That it is kind of like a Move controller out of the box or at least that is how it has been made to look so far.

I really hope it is the case that most titles will be available via remote play than not. I thought this idea was one of the best things about the WiiU and was hoping that the Vita was going to fully allow for this on the PS3 way back when. I am sure we will see here in the next few weeks and as the PS4 comes closer to its launch date. Whenever that may be.