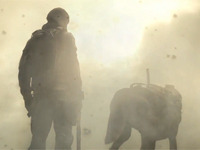 It looks like we are going into a post war world that has been ravaged by humans once again; the mongrels. Well at least this is what can be assumed through the "game play" trailer that shows maybe 10 seconds of actual game play while the rest is rendered with in-game graphics. It looks interesting, but I have a feeling that it is going to focus on the basic staple enemies of the world again doing bad things or having already done said bad things. While I am not looking for spoilers to the story, I at least want an enemy that isn't Russian, German, or Colombian.

It is nice to see how far they are moving with in-game graphics and animations with their new engine for the franchise, and most likely other IPs soon. I know a lot of you out there focused on the ability to add hair to the body parts of the characters, but I am more interested in seeing how they handle the bruising and minor cuts. In that aspect, any other fine detail that adds to the visuals of the game. Maybe it is just my understanding of the difficulty of adding these features to character models real time, but I see so much potential even though it is only being used to make people "furry."

I'll shut up for now and let you get to the videos now. While it does seem like the big show is on the dogs and arm hair effects, try to look at the bigger picture and where this can actually lead to. As always, feel free to leave your thoughts below for everyone.

Behind The Scenes Preview Video