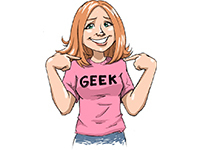 We all know what it feels like to be an outcast and somewhat different than your peers. Whether you are in middle school, high school, college, or the work force, you know what it feels like to be left out. For all of you who have ever been called a geek, nerd, dork, or freak, I know how you feel. When I was in high school I used to try to defend myself against such names as “geek” but now I realize that names like that are not such bad things. Each of these descriptive definitions of someone has many positive aspects to offer.

The term geek is often referred to as someone with higher intellectual abilities and finds enjoyment in odd things. To me the term geek is not a bad thing at all. We all know who the biggest geek of our time was, Mr. William Gates, but look at his geeky self now! No longer does he sit back and take orders from his more popular peers, on the contrary, now it’s the opposite.

Look at the kind of following and impact that Geeks have had on our culture. Look at such movies as the Star Wars saga, The Lord of the Rings series, and Rocky Horror Picture Show and recognize the millions of fans that some people would refer to as “geeks.” Another good example of “geeky” culture would be the recent craze of anime and manga. This Japanese animation enthusiasm took to America the moment it hit our soil!

We cannot forget the “geeky” passion of gaming. Yes this might be something “normal” people consider a waste of time and stupid, but I believe it is the complete opposite. Gaming is not just about having fun anymore either; it is also about learning, reflexes, logic, and strategic thinking. In my opinion gaming could be the next possible Olympic sport!

I find myself enjoying every aspect of geek culture and think that it is a wonderful thing that should no longer be said in a negative manner. Anyone who has ever been a movie buff, read a comic book, enjoyed a sci-fi movie, was into theater, gamed for the fun of it, or role-played, its good to know that I can count on you. For those of you who feel that these things are a waste of time, boring, or useless, I urge you to not judge us by what we enjoy because maybe one day you will find yourself engaged in something “geeky” and I guarantee you will not want to be judged by it.